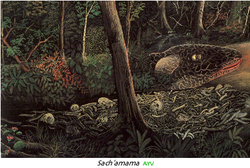 The following represents some of the folklore surrounding the giant snakes of the Amazon Jungle in Peru as told by the local tribes people for hundreds of years.

It does not represent the opinion of the expedition team but contributed in supporting some of the research material and eye-witness accounts.

Sachamama: (n) In mythology, the mother of the forests, is a two headed serpent. When she surfaces she becomes the tree of life: one head eats its tail and the other points to the sky.

Mistaken for the Yacumama, the two are similar in strength, length and thickness.

She was a goddess in the shape of a snake with two heads. When she passed on to the heavenly world she transformed into K'uychi.

Literally, spirit mother of the jungle, the Sachamama is a huge eared boa believed to dwell in the same place for a very long time. Vegetation grows on her body and makes the snake easily mistaken as a fallen tree. She may devour the unaware hunter who has accidentally stepped on her body.

This big snake rarely moves, remaining perhaps hundreds of years in the same place. One can even climb on top of her without realizing one is on this dangerous animal. If prey passes by, the Sachamama hypnotizes it, draws it in with its powerful magnet and swallows it. When a person recognizes it, he must leave right away to avoid being crushed by a tree or struck by lightning, because she produces great storms.

When the Sachamama moves to another place, she throws down the trees growing on her back and makes a path by knocking down other trees.

She can make people sleep in order to devour them. 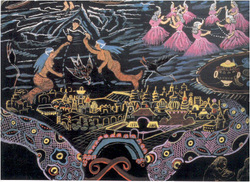 This mythical being lives exclusively in the water. Yacumama means Mother of the Water. This water goddess was portrayed as a snake. When she came to the earth's surface, she transformed into a great river.

She could also pass to the upper world. In that shape she was called. She is a huge anaconda thought to live at the bottom of lakes and rivers. It's the water counterpart of what the Sachamama is on earth.

The Yacumama can dive deep into the water and become a submarine or travel on the surface of the water as a steamboat. 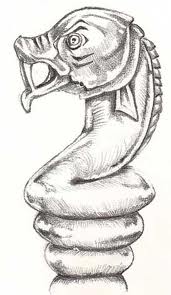 A MYTHICAL serpent-like creature who lives in the murky depths of a lake and is the subject of countless childrens’ stories. Sound familiar? Meet Nyaminyami, Zimbabwe’s very own Loch Ness monster.

He has the head of a fish and a snake’s body. He lives in Lake Kariba, a magnificent man-made dam in the northwest of the country, studded with hippos and the eerie skeletal tops of long-dead trees. And for the first time in more than a decade, Zimbabweans living on the shores of Kariba are reporting a mysterious sighting on the River God.

State media is reporting that fishermen and residents of Mahombekombe, a suburb of Kariba town, saw Nyaminyami earlier this month.

“We were anchoring our boat near the District Development Fund harbour when we saw a large group of people rushing to the harbour. We quickly roped in our boat and rushed to where the group had gathered.

“I saw, with my own eyes, a monster snake that was almost two hundred metres long,” said fisherman Tapera Siyungungura. “Ask anyone who lives around this area and you will get confirmations of the story.”

“The truth of the matter is that Nyaminyami revealed itself to the people recently,” a second fisherman, Masenzi Dube Zimbabwe newspaper the Sunday Mail.

After the claims, the Mail sent a news crew on the long five-hour drive to Kariba to investigate the claims. The paper reported the beast took 45 minutes to ‘snake’ across the harbour in broad daylight – giving ample time to villagers to watch him and marvel. Eyewitnesses claimed Nyaminyami was so big that a truck would not have killed him if it had run him over.

Nyaminyami’s name is a corruption of a phrase in the local Tonga language that means “pieces of meat”. It’s a reference to Nyaminyami’s selfless character: apparently during times of drought Nyaminyami would let villagers cut pieces of his body to eat. And though you could take a bite out of him, no matter how many bites you took you’d never finish eating the creature up, say locals.

Nyaminyami was separated from his ‘wife’ during the construction of the Kariba dam wall by the colonial authorities during the 1950s, so the story goes. There is a belief that the beast is forever trying to get over the wall to be reunited with her – and those frenzied attempts are what cause the frequent earth tremors in the area.

But not everyone is buying the story that Nyaminyami caused a few houses to fall down in Kariba when he made his surprise appearance this month.

“I can confirm that [he] did not destroy any buildings...It is true that Nyaminyami was sighted here but some residents are just spicing up the story,” fisherman Lovemore Sibanda told the Sunday Mail.

The paper reported on Nyaminyami’s “reappearance” as if it were entirely credible. Some Zimbabweans believe in goblins and mermaids -- and the press regularly reports on their appearances too. Earlier this year Water Minister Samuel Sipepa Nkomo claimed that mermaids in two dams in eastern Zimbabwe were preventing the installation of water pumps there. Special rites had to be conducted to appease the mermaids.

Some have tried to offer evidence for Nyaminyami’s existence. One theory is that he may bea giant African catfish. Others are more sceptical.

“This is just a python,” says one local journalist, who has reported on the story for more than 15 years. - Scotsman 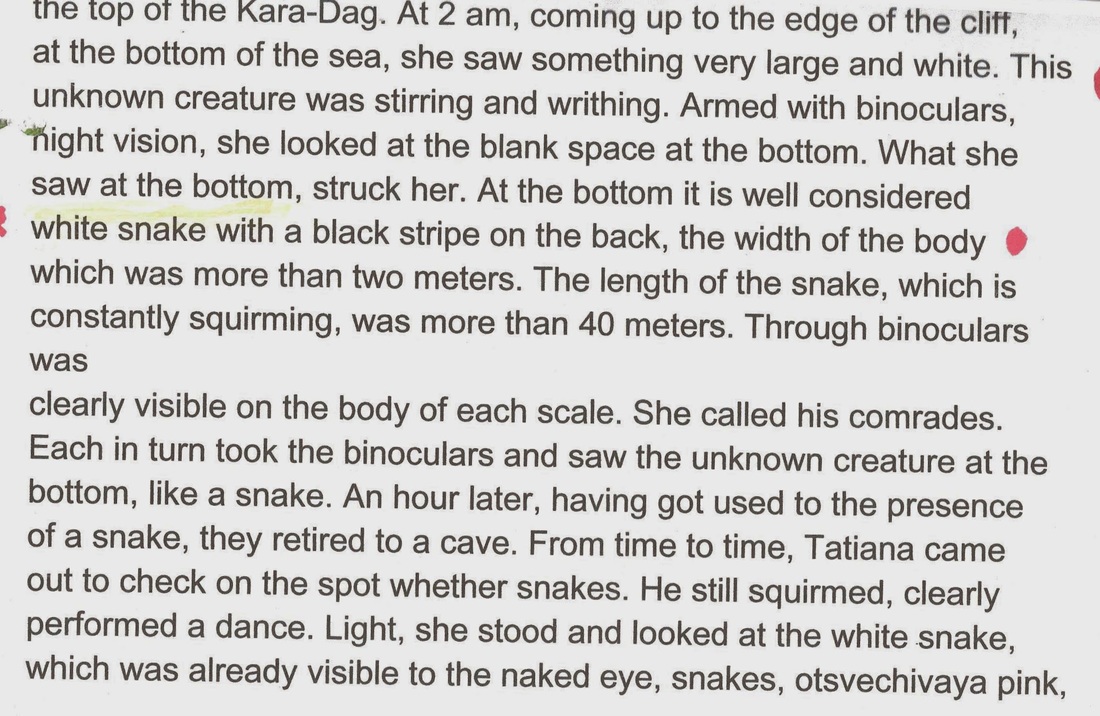 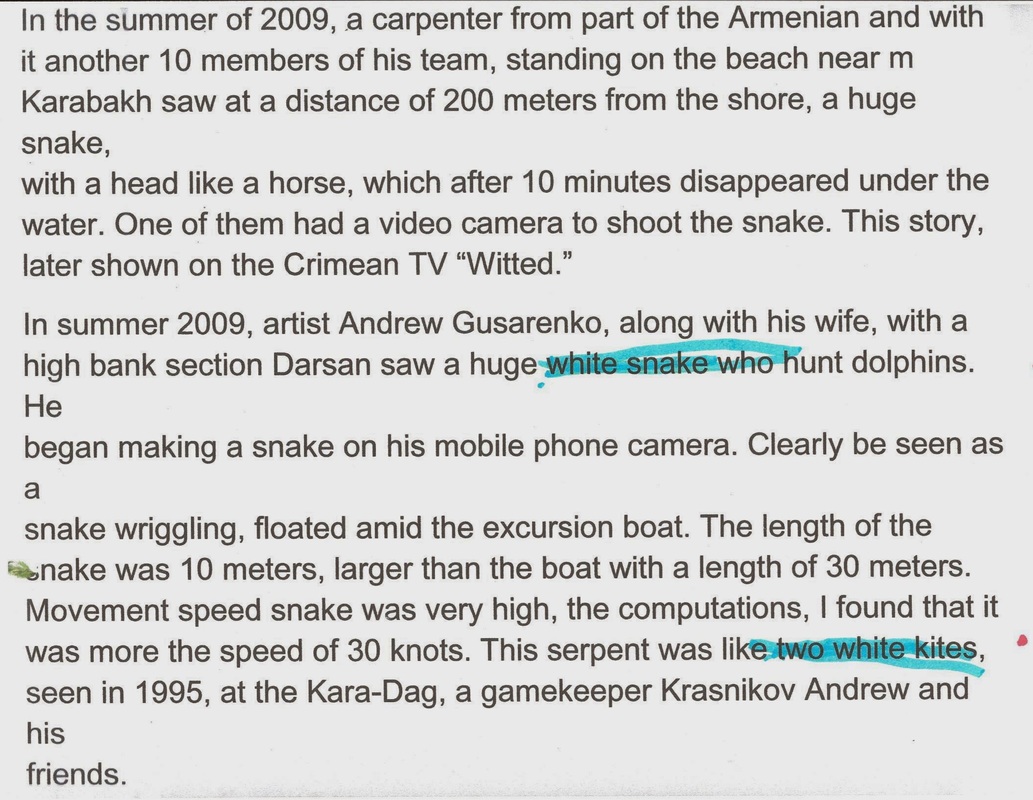